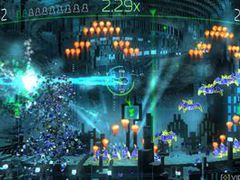 Housemarque’s shooter Resogun is coming to PS3 and PS Vita on December 17, Sony has announced.

Climax was in charge of bringing the PS4 launch title to the other Sony platforms, where it was tasked with scaling back the game to systems with significantly less graphical grunt.

“The biggest technical difference is that the PS Vita and PS3 games run at 30 instead of 60 FPS like the PS4 game does,” wrote Pedro Sousa from XDev Studio Europe. “This was a very difficult decision to consider, but a very necessary decision to allow the team to focus on what was possible and to make the best game possible for both of these platforms. The framerate is locked, so you can expect a solid performance even under a big storm of voxels.”

The new versions are fully Cross-Save and Cross-Buy compatible, meaning you buy one and own all three versions, with game saves able to be moved between whichever version you are playing.

PS Vita players can also benefit from ad-hoc co-op and touch controls if they choose to use them.