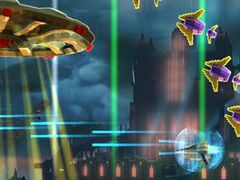 The add-on will be available for free to those who have purchased the Season Pass.

Defenders takes place during humanity’s last stand against the overwhelming Sentient forces. Pushed back to an unknown planet you will take the fight to the bad guys in two all new game modes, Protector and Commando. More info on these modes can be found in the video below.

In addition, a free Resogun Challengers update is now available to all players. Described as the largest content update to date, Challengers introduces a new system of player levelling which is achieved by earning Challenge Points as a reward for completing new challenges and feats across all existing game modes.

The update also contains an all new Human Gallery to organise your collected Human types and the fan-requested Photo Mode. And you get a host of new Trophies, too.

For those without a copy of Resogun, it’s now available with a 35 per cent discount.