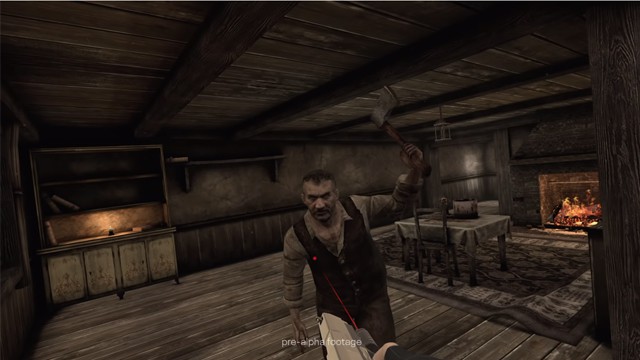 As promised during its initial reveal, Oculus has revealed more details on the upcoming Resident Evil 4 VR, including the information that this new version of the classic title has recieved an extensive visual and audio overhaul.

As detailed during last night's Oculus Gaming Showcase, the teams at Oculus and Amature have been working with Capcom for the last two years on the project, with the entire game coming across from start to finish. Weapons and objects are now physical items in the world, and rather than just appearing in a UI and magically teleporting to your inventory, you'll be able to manipulate them and even perform actions such as taking a weapon physically off your body to equip it and Leon can now wield seperate weapons in each hand.

The team at Amature has also remastered over 4500 textures having them either repainted or had the resolution increased, while character animations have been converted to the more recent Unreal Engine 4. What's more, Oculus say that Amature has even fixed some bugs from the game's 60FPS verisons.  Audio meanwhile has also been given an overhaul to convert the game's original audio data to 3D spatial sound to ensure you hear Ganados coming for you from any direction.

Naturally given VR's nature, there's going to be several ways to navigate around the world as Leon, including standard movement but also teleportation and promised options for seated play as well as room-scale offerings that you'll be able to adjust accordingly depending on what's the most comfortable for you.

You can check out the full Resident Evil 4 VR portion of the presentation in the video below from the 5:55 mark (hopefully we've queued it up so it should play automatically). No specific date was given, but the game will be launching exclusively on the Oculus Quest 2 later this year.