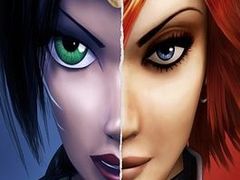 Great news for Rare fans: The legendary UK developer has said Microsoft’s motion-sensing technology Project Natal provides it with an opportunity to investigate some of its older classic games.

Not only that, but Rare reckons it could do an “absolutely phenomenal, world-beating” Natal version of one classic IP in particular.

Speaking exclusively to VideoGamer.com, design director George Andreas, who has been with the company for 15 years, said “there are IP that we have looked at and are looking at and will be looking at in the future”.

Rare has one of the most impressive back catalogues of any developer in the world. In the 90s it created some of the greatest games of all time, including Donkey Kong Country, Killer Instinct, GoldenEye, Banjo-Kazooie, Perfect Dark, Conker’s Bad Fur Day and Diddy Kong Racing.

After being purchased by Microsoft in 2002, Rare moved on to creating games for the Xbox 360 console, including Kameo: Elements of Power, Perfect Dark: Zero, and more recently Viva PiÃ±ata and, Banjo-Kazooie: Nuts and Bolts.

Andreas said: “Natal as well gives us an opportunity to maybe at some point in the future investigate some of those older IPs. I won’t name names.

Rare is knee deep in secret Natal projects at the moment, and recently advertised for designers to help it create experiences for the technology. Rare was also behind the New Xbox Experience Avatars, which launched last November.

Andreas added: “Yes, there are IP that we have looked at and are looking at and will be looking at in the future as well. So, never say never. Nothing is dead in the water. There is always scope to bring something back if we feel it’s the right time.”

When asked what classic franchise he was referring to, Andreas replied: “I’ll keep that to myself for now.”

The killer Xbox 360 launch title? Can this follow-up to the N64…

The killer Xbox 360 launch title? Can this follow-up to the N64…