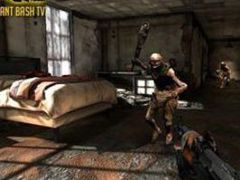 id Software co-founder and programming wizard John Carmack has announced that RAGE: Mutant Bash TV, the first id Tech 5 powered game for iOS devices “has been approved” and “should be on the app store tomorrow morning”.

Mutant Bash TV is a post apocalyptic combat game show in the RAGE wasteland. Gameplay is on-rails, with players encouraged to play through stages multiple times in order to gain higher scores.

Beyond basic survival, there are pick-ups, head shots, and hit streak multipliers to bring some depth to the gameplay.

“A large goal of the project has been to make sure that the levels can be replayed many times,” said Carmack. “The key is making the gamplay itself the rewarding aspect, rather than story progression, character development, or any kind of surprises. Many of the elements that made Doom Resurrection good the first time you played it hurt the replayability, for instance. RAGE iOS is all action, all the time. I have played the game dozens of times, and testing it is still fun instead of a chore.”

With Epic’s first real game output coming soon – though we’ve already seen that technically the Unreal Engine 3 can produce staggering results on iOS – it’s now the turn of id to show what its id Tech 5 is capable of on the mobile platform.