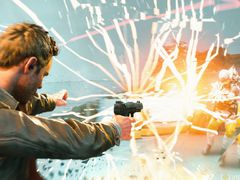 Quantum Break’s Steam release has been delayed by two weeks to September 29, Remedy has announced. The game was previously due to launch on the platform on September 14.

The setback appears to stem from a delay in production of the game’s ‘Timeless Collector’s Edition’, a physical PC edition that includes the game plus a Making of Blu-ray, book, soundtrack CD and a pair of posters. As a result, the Steam release has been delayed as well.

“Due to additional time required for mastering and manufacturing the Quantum Break – Timeless Collector’s Edition for retail, the decision has been made to move the release to September 29th,” reads an update on the website of distributor THQ Nordic. “This concerns both, the Steam version, as well as the retail edition.”

Quantum Break launched on Xbox One and Windows 10 PC back in May. Tom called it “thoroughly entertaining”, but was disappointed he couldn’t go all Max Payne.