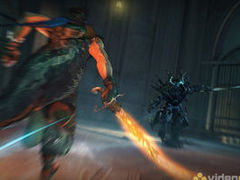 Ubisoft has announced via its Twitter that the Prince of Persia Epilogue DLC, previously scheduled for release today on Xbox LIVE Marketplace and the PlayStation Store, has been delayed by a week and will now be released on March 5.

Players will also gain access to a new Energize power, making it possible to reconstruct destroyed areas of the environment to create a path. A new Sprinting Clash attack will also be implemented – a duel move that lets the player or the enemy trigger a sprint attack, charging towards each other and clashing weapons.