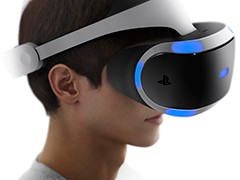 UPDATE: In response to this story, a Sony representative told VideoGamer.com that “the launch date [for PlayStation VR] will be announced in due course. We have nothing more to comment on at this time.”

ORIGINAL STORY: GameStop’s CEO Paul Raines has said that the company is gearing up to launch Sony’s virtual reality headset PlayStation VR in the autumn.

Raines hinted at the release window during an interview with Fox News yesterday while explaining how the company is planning to enter the VR market later this year. “We will launch the Sony product this fall,” he said, “and we are in discussions with the other two players [Oculus Rift and HTC Vive].”

You can hear his comments at 3:34 in the video below.

If Raines’ comments are correct, it would suggest that PlayStation VR may have been pushed pack from the ‘first half of 2016’ launch window previously announced by Sony. VideoGamer.com has contacted SCEE for comment.

Sony has yet to announce exactly when PlayStation VR will launch or how much it will cost, but has confirmed that it will be priced similarly to a new gaming platform.

The device is only expected to be compatible with PlayStation 4.