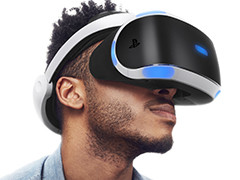 The virtual-reality headset was made available to pre-order in the UK last week, with launch day stock selling out on Amazon within 45 minutes. GAME, meanwhile, is still guaranteeing units in time for launch.

“The news overnight on pre-orders is extremely encouraging, but I’d be very wary about extrapolating how we’ll do through to launch based on less than 24 hours,” Ryan told MCV shortly after pre-orders went live. “I would say that the early pre-orders has surpassed our initial expectations. So that suggests demand, and therefore day one, might be quite significant.”

Sony announced last Tuesday that PlayStation VR would go on sale this October for £349.99. The unit won’t include the required PlayStation Camera, however, resulting in sales of the camera and the optional PlayStation Move controller to skyrocket shortly after.

I got my first taste of PlayStation VR earlier this month with Battlezone which, as it turns out, was enough to convince me to pre-order one.