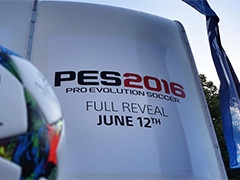 PES 2016 will be revealed next Friday, June 12, according to branding allegedly spotted at the UEFA Champions Festival.

An image of the marketing was posted by a Twitter user yesterday, telling fans to expect a “full reveal” of this year’s game next week.

Konami has yet to formally announce PES 2016, but denied rumours a few weeks ago that suggested it may have canned the series.