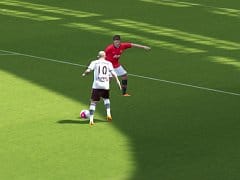 PES 2015, like Gazza in Euro 96, is inches away from greatness. That Konami’s latest misses its target, preventing it from being one of, if not the best, football games of all time, is just as agonising as that infamous extra-time blunder, and nearly as perplexing.

This is the first year in a long time that Konami seems to have supreme confidence in its product, a pomp not seen since the PS2 era (or the rather embarrassing PES ‘crown’ logo redesign incident of the late 2000s, notable for occurring when the series was utterly in the doldrums). It is right to be confident, if not cocky: FIFA is stagnating, and vast improvements have been made by the teams from Japan and Windsor. If ever there was a time to reassert critical (if not commercial) superiority, it’s now.

Some enhancements are immediately obvious, such as the revamped front end that now resembles EA’s slick tiles, as opposed to last year’s pointer-based exercise in slow suicide. The menus are clear and easy to navigate, presumably due to the input of the western team. Overall it’s much, much better, even if the tactics menu, which still uses the on screen cursor, is terrible and needs sorting ASAP.

The engine as a whole is superior to FIFA in other ways. Whereas that title has made strides in its dribbling – not just relying on the right stick anymore to beat a man, and seemingly reducing the size of opposition player’s hit boxes from Buckingham Palace to something more realistic – there’s still nothing to touch PES’ feeling of momentum and the importance it places on body shape.

Getting round players isn’t easy, but it is fair and clear in its rules, and crucially your on-screen avatars communicate their abilities within seconds of receiving the ball. Ronaldo’s first touch and short, explosive, almost pecking strides tell you he’s a player to be reckoned with. Van Persie’s quick turns and expansive takes tell you he’s lethal even with his back to goal. Chris Smalling, well, you get the picture.

There are mechanics here that are potentially the best they’ve ever been. Finishing can be deliriously satisfying, from bar-crunching long-rangers to goalkeeper fake-outs that Messi would be proud of. Opposition strikers are too reliant on chipping the keeper should you move him out for one-on-ones, but on the whole it’s responsive, satisfying, and in some cases, utterly unpredictable, leading to realistically-deflected goals or jump-from-the sofa first-timers.

Your attacking options are bolstered by good teammate AI, which frequently finds space without having to be told, and is made all the more satisfying thanks to defensive equivalents which aren’t totally braindead. Goalkeeping animations also add to the goals you score, especially when you use their position and momentum against them.

Frankly, all of this stuff is superb. In two-player vs CPU games, where the space on the pitch plus the runs and abilities of your players can be exploited to its fullest, PES 2015 strides past FIFA and many of its own predecessors with ease.

The aforementioned agony, however, comes from the fact that PES’ passing – always one of the jewels in its stupid crown logo – now sometimes comes with a noticeable delay between pressing the button and the player actually releasing the ball. It’s not as bad as say, FIFA 97, where jabbing pass had all the immediate effect of sending a letter to the local council complaining about Ewoks – but it is a problem.

Such a delay runs counter to the core PES experience – PES 2013’s passing is the best in any football game, and if it was the same here then 2015 would be untouchable. I can only presume that the issue stems from the new engine, and while it’s not a disaster – slick, one-touch passing moves are unaffected, because the command is queued and executed before the ball reaches the player – it sadly scuppers any claim new PES can have to the all-time top spot.

To see just how it can affect the experience as whole, load up the (improved and now utterly compulsive) Become A Legend mode. Watching the CPU play around you is a joy – the game has a fluidity and intelligence that makes sitting through the end of matches after you’ve been subbed something to enjoy rather than endure. (Especially if ‘Fluid Formations’ are on, where different strategies are implemented depending on who has ball possession). That you sometimes can’t move the game around like this because of the delay is as frustrating as it gets.

I can already tell this is going to be a contentious issue. Some players (including those I have spoken to personally) while acknowledging it exists aren’t bothered by it. Others find it excruciating. It is possible to tune it out – and PES does so much right that there will be long stretches where it doesn’t register at all, lost among the near-best in class football the rest of the game offers.

And yet, when you’re on the ball, that delay can be the end of promising attacking moves, or a defensive disaster waiting to happen. Like Man Utd’s back line, while other elements surge to greatness, it will come back to haunt you at some points.

Konami has said it wants to get back to what made the older PES games so great with 2015, and although a lot of that sentiment is the nostalgia talking (fire up PES 4 or 5 on PS2 and you’ll see what I mean: 2013 is miles better) PES 2015 very nearly reaches the heights of some of its forbears. Master League is still crack-level addictive (especially thanks to a tweaked transfer system that enables you to negotiate in real-time), Become A Legend is great, and the online modes (which sadly we couldn’t test) are promising.

But the fact is that PES 2015’s passing is at the heart of the entire game, and it’s not quiteas good as it could be. You’ll get used to it, learning to ignore the sight of the power bar chugging up (or turning it off completely) before the ball is let fly. There’s a chance it may not even bother you at all, and either way there will be long swathes of play that delight. If it gets patched out, then PES 2015 will go from being the best football game of this generation to one of the all-time greats. Until then it’ll be agonisingly short.

Unlike Mr Burns I haven’t really enjoyed PES for over a generation. PS2 era PES was brilliant, building on the amazing work done on the Pro Evo series on PSOne. But then FIFA got good and PES stagnated. FIFA had always had the edge in terms of authenticity thanks to the licenses, but it had finally pulled ahead in terms of gameplay too.

There’s no denying that the official teams and competitions are hard for PES to compete with (unless you absolutely love the Champions League), but at least this year’s game feels like it’s close to recapturing its magic. But it’s got that dreaded delay on passing. I can see why passing has a delay, allowing you to weight them in a way that high-level players will really appreciate, but at times I just want to get rid of the ball quickly. Why can’t I snap pass, with only prolonged pressing causing the more nuanced option to kick in?

This gameplay issue, for me, is the biggest problem PES faces this year. You might be able to ignore it, but it frequently broke up great moves during my time with the game. There’s also the licensing. If you like real teams, real kits, real everything, PES 2015 can look half-finished. It’s something Konami can’t really fix given EA’s stranglehold, but if you’re used to FIFA it comes as a bit of a shock. Player likenesses, too, disappoint. Big players look brilliant, but too many first-teamers for large clubs (such as Tottenham) are hard to recognise. Players also glitch through each other during celebrations, and I’ve seen goalkeepers punch through the frame of the goal. The game can look brilliant at times, but it’s far from the complete package and still some way from FIFA.

It’s great to have PES back offering serious competition to FIFA, but this isn’t the year it topples it. Not for me anyway.

A superb football game held back by a frustrating flaw in its passing game, this is the best football title on new-gen. But it could have been the best of all-time.
8 Superb shooting and one-touch passing. Utterly authentic feeling. Master League is as addictive as ever. Stationary passing carries a noticeable delay.