Payday: The Heist No Mercy map is not a Left 4 Dead prequel 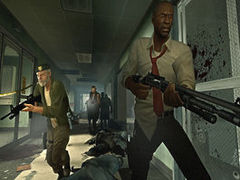 The truth has finally emerged surrounding the much-rumoured Left 4 Dead / Payday: The Heist crossover: The latter is getting a map based on No Mercy, but it’s not canonical.

In other words, you’ll be able to play through a heist set in the hospital for Left 4 Dead 1, but it won’t be explaining the backstory to Valve’s co-op shooter series.

So, why the confusion? Valve’s Chet Faliszek it was simply due to “some overexcited marketing guys”.

“This is a 100% Overkill made mission for Payday: Heist simply set in no mercy hospital from the Left 4 Dead series,” said Faliszek, speaking to Kotaku. “It is not telling the origins of the Infection and is not canon.

“There is a little cameo from one of the L4D characters (the comic should give you a hint) and a fun little Easter egg with a payoff later in Left 4 Dead. Just us having some fun with a studio we are friends with and who have also made a great co-op game.”

Valve has yet to say anything concrete about the possibility of a third Left 4 Dead game. Never mind that though, where’s Half-Life 3, dammit?