Overkill is not developing a Left 4 Dead prequel 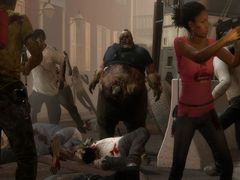 Overkill Software is not developing a prequel to Left 4 Dead, Valve has confirmed.

“I want to make sure that people don’t think the prequel is coming,” Valve developer Chet Faliszek told PCGamesN.

Rumours emerged last week suggesting that the Payday: The Heist dev could be working on a Left 4 Dead prequel in collaboration with Valve.

But though that may not be the case, the two developers are still working on something together, Faliszek confirmed.

“We were hanging out with the Payday guys, we were talking about how we all love co-op games,” he continued.

So what could the Valve/Overkill project be? Faliszek suggests it may have something to do with series cross-overs.

“In TF2 you might see some other games’ weapons get translated and put into that game. We’re doing something similar to that, but it’s a little bit more involved.

“We’re trying to be a little coy and a little fun because we want the communities to discover it.”

Could we see the Portal gun work its way into a Payday: The Heist sequel? Watch this space.

It was announced last week that Overkill had signed with 505 Games to publish Payday 2.