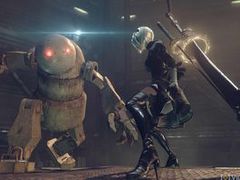 Nier: Automata’s director Yoko Taro actually wanted to call the game Nier: Android, but decided against it to avoid running into trouble with Google.

“Because it’s a story about androids, I wanted to call it Nier: Android,” Taro revealed in an interview with EDGE. “Obviously Google’s for the trademark [on Android] and we were worried about it. There was no title fixed by the time E3 came, so we had to do the presentation without.”

Nier: Automata was revealed as Nier: New Project earlier this summer, prior to the game’s final name being locked down. But Automata is still “a very good title,” Taro believes, adding that “it’s representative because it covers all kinds of meanings”.

Nier: Automata puts players in the role of a female android tasked with defending Earth from alien machines. The game is due to launch exclusively on PS4 in 2016.