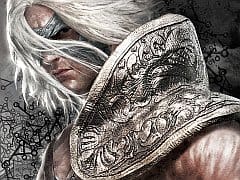 Where to start with NIER, perhaps the most genre-bending game of 2010? This JRPG from cavia (Resident Evil: The Darkside Chronicles) is a hodgepodge of so many gameplay types that it’s impossible to work out, even once completed, what, exactly, it is. This is undoubtedly a good thing.

Even describing it as a JRPG may be stretching it, for while NIER has experience points-based levelling up, weapon upgrading, towns, NPCs, item farming, party members, and all that other role-playing stuff we know and love, it doesn’t really feel like a JRPG at all.

In truth, it feels more like an adventure game, specifically that great influencer: The Legend of Zelda: Ocarina of Time. Indeed on the face of it, NIER looks like a high def OoT, except with lots and lots of blood and loads of swearing. But really this is an imperfect comparison, because while cavia has clearly used OoT’s manual to fashion NIER’s foundations, built on top are nods to old-school Resident Evil, 2D side-scrolling platformers, “shmups” and even God of War.

So yeah, where to start with NIER? As always with these things, it seems best to start at the beginning.

NIER begins with a single line of dialogue from Kaine, the game’s eye-catching, foul-mouthed hermaphrodite party member. She’s very, very angry at a floating, talking book called Grimoire Weiss. With the f-bomb still ringing in our ears, realisation sets in: Kaine has set the tone perfectly for what is a very different Square Enix game.

The game begins properly in the summer of 2049. Protagonist NIER, a bulky 40-something, is fending off mysterious, semi-transparent monsters called Shades in an abandoned, snow-covered shop. He is with his daughter, Yonah, a young girl racked by the deadly Black Scrawl disease. Things aren’t going well. The pair are cold, hungry, and desperate.

NIER touches a magical book, using its power to defeat the unending conveyor belt of Shades. Then, we skip 1300 years in the future, and things start to get really weird. The world is on the verge of destruction. Civilisation has reverted to a feudal existence, with relics of the old world a depressing reminder of what was lost. NIER, with his daughter Yonah, live in a small house in a small village. Yonah still suffers from the Black Scrawl, and NIER still battles to save her from it, and the Shades.

So, NIER’s a science-fiction post-apocalyptic game, despite the swords and spears and dark magic. It’s a game that begins with a whiff of Cormack McCarthy’s superb novel The Road, but quickly descends into typical video game fare: the slicing and dicing of more monsters than you can swing a double-handed sword at.

Combat is a somewhat schizophrenic fusion of third-person hack-and-slash and spell casting. It revolves around mashing the attack button, barrel rolling to evade enemy attacks when you see their “tell”, and using the odd Dark Magic power, cast from the aforementioned floating book Grimoire Weiss.

Ah yes, Grimoire Weiss. NIER has floating, talking books. In fact, it’s all about them. Weiss, wonderfully voiced by Liam O’Brien (Gaara from Naruto), is rescued by NIER not long after the jump to the future. The pair agree to help each other: NIER needs the book’s power to defeat the Shades and save his daughter, and Weiss needs a companion to help him regain his memory.

Functionally, Weiss grants NEIR an assortment of powerful spells. Dark Blast, perhaps the most useful, fires out damaging red balls, lending the game shooter-like qualities. Dark Whirlwind, on the other hand, protects NIER by surrounding him with rotating blades. There are eight such powers, gained as bosses are defeated (Zelda!), just enough to add depth to combat that can at times feel basic. Indeed, each power has an alternate state, usually triggered by holding one of the shoulder buttons down. But still, NIER’s combat is, in truth, simplistic, not least compared to the fighting systems of Bayonetta and Ninja Gaiden. It’s also somewhat unspectacular, despite the constant blood spraying. But it is satisfying, and manages to avoid feeling repetitive.

While Weiss grants NEIR magical powers, it is the constant banter between the two that proves the highlight of this most unlikely relationship. As NIER takes on side quests from the world’s many hapless NPCs, Weiss often snipes with disapproval. His snotty, condescending tone hits all the right notes. Mundane fetch and hunting quests force Weiss to question the duo’s actions – in many cases in agreement with the player. There are some genuine laugh out load moments from Weiss, as well as references to video gaming and its traditional components. He’ll often call bosses exactly what they are: bosses, and talk about that most ridiculous video game mechanic: the weak point. Weiss is genuinely likeable, somewhat complex, and NIER’s Navi.

Speaking of the mundane, NIER’s full of it. In between main story missions, you’re free to complete side quests or explore the game world and its handful of towns and villages. Outside the main village are open fields (Zelda!), filled with animals, Shades and other oddities, which lead to other areas in the game world, including a village set high up in a mountain, a desert area with a city full of strange, masked people, a mysterious forest, and a junk town packed with robots from the old world. If you dabble in NIER’s distractions, the pace slows to a crawl. Everything from fishing (Zelda!) to growing vegetables in your back garden is possible. Neither is particularly good fun or well implemented, but sometimes you do get lost in the banality of it all and forget about poor Yonah’s plight completely.

You can ignore all of this, and, thankfully, the game doesn’t punish you if you do. If all you want to do is concentrate on the main story and leave the NPCs to their own devices, that’s up to you. There is no need to grind; NIER is perfectly beatable without it. And having the option is welcome: do you want a 20 hour Japanese adventure, or a 30 hour one? The choice is yours.

What’s great about NIER is that, unlike so many JRPGs these days, you actually want to see it out to the end. NIER’s ethereal, mysterious air, complemented beautifully by a quite stupendous soundtrack (the music that plays as you’re out in the field digs a hole in your brain and buries itself alive) rekindles memories of Haruki Murakami’s multi-layered dream-like worlds. Nothing is what it seems, says Square Enix’s blurb, and truer words were never spoken.

Unfortunately, while NIER’s nonsensical plot is adult and smartly woven, it can’t help but succumb to quintessentially Japanese cheesy melodrama, particularly towards the end, and is just a bit too far out there to fully grasp. Really, only half of the story is ever properly explained. Throughout you know something isn’t quite right, and you excitedly await huge revelations at the end, but satisfying exposition never comes. As NIER unravels the truth behind earth’s shady past, there’s more than a hint of frustration as the game does an Akira and decides making sense is for losers. Once finished, a new game plus option presents itself, and multiple playthroughs result in further story details, but why should we have to play through a game four times to get the whole story? The answer is: we shouldn’t. I found more explanation from the list of must-avoid spoilers sent to us by Square Enix than I did from the game’s dialogue and cut scenes.

Really though, compared with so many recent Square Enix games, NIER’s story, and indeed its attitude to gameplay, is refreshing. It’s packed to bursting with interesting ideas, from occasional 2.5D side-scrolling platforming to top down perspective puzzle solving. NIER’s camera is in a constant state of flux, and only occasionally suffers from the embolisms that afflict so many third-person action games. One section, set in a horribly creepy manor, sets the camera in ceiling corners in classic Resident Evil style. As you explore its mysterious innards and meet Emil, a powerful young boy who eventually joins your eclectic party, you feel as if you’re playing a completely different game. Later, there’s a section with the camera set at a distant isometric view, a clear nod to old-school Western RPGs. At one point, the camera goes birds-eye, leaving you free to direct Dark Blasts with the right thumb stick in a section that brings to mind Geometry Wars. There’s even one section which doesn’t involve a camera at all, instead presenting the player with walls of “choose your own adventure” text. NIER, really, is one big electronic doffed cap to games past and present.

If NIER’s genre-fusing gameplay is its strength, then perhaps it is also its weakness. As is the case with so many games that try their hand at being a Jack of all trades, NIER ends up being master of none. The combat, while functional, isn’t brilliant. The graphics, while styled, are horrible. The 2.5D sections, while interesting, are throwaway. The text-based sections, while different, are completely unfair. In an effort to be as unique as possible, cavia has at points forgotten what it is that makes video gaming fun: fun. Some of the boss battles, while appropriately bonkers and screen-filling, are frustrating in the extreme, particularly when they go all “shmup” and spray hundreds of red blobs at you. And some of the side quests are so mundane that you wonder if they’re designed to make you resent them.

Still, the wonderfully designed characters and intriguing plot do just enough to elevate NIER above much of what is coming out of Japan these days. It is, in many ways, the kind of game critics of the Japanese RPG have been calling for: different, fresh, and in parts distinctly un-JRPG. Not all of it works, but it’s a commendable effort, and a memorable experience.

NIER is, in many ways, the kind of game critics of the Japanese RPG have been calling for: different, fresh, and in parts distinctly un-JRPG.
8 Captivating story Lots of fresh, unique ideas No one single element stands out Graphics are poor