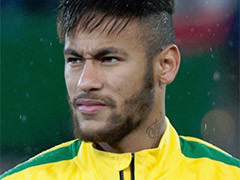 Barcelona forward Neymar will be the global cover star of PES 2016, Konami has announced ahead of the game’s full reveal this Friday, June 12.

Customers who pre-order this year’s game will also receive Neymar as an exclusive player reward for use in PES 2016’s team building mode myClub.

“Neymar Jr. is a player that perfectly fits the PES brand, and what we want to achieve” said Konami’s European Brand Director of Football Erik Bladinieres. “His unique qualities and the ability to surprise goes hand in hand with the gameplay experience in PES 2016. In our anniversary year we want to celebrate the past, while look forward to the exciting future of the brand. We’ll do this with Neymar Jr. leading our campaign.”

“This is a real honour for me to be cover star for PES 2016,” added Neymar Jr. “The series has long been praised for its sheer level of control and utter realism and I am delighted to be working with such a talented team as Konami. I am fascinated by the huge amount of work involved in putting together the game and ensuring the world’s top players look and play just like the real things, and cannot wait to see myself in action as soon as possible.”

Expect to hear much more on the game – including formats and (hopefully) a release date – this Friday. But until then, check out your first look at PES 2016 in the teaser trailer above.