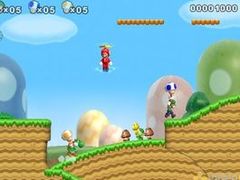 According to reports, Nintendo’s New Super Mario Bros. Wii came racing out of the blocks in Japan, selling 422,000 units on day one of its release.