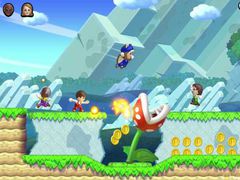 It had been assumed the Wii U platformer would run at a maximum of 720p, given that the game has thus far only been demoed using this resolution.

However, the game’s official website states: “Experience Mario like never before… in full 1080p HD, only on the Wii U console!”

NSMBU isn’t the first Wii U game to make use of the Full HD resolution, with downloadable 2D platformer Toki Tori also confirmed as a 1080p title.

Wii U will launch in the UK on November 30 and is available to pre-orer from GAME.co.uk.