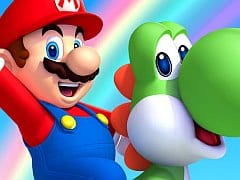 Bad news: New Super Mario Bros. U opens with all the issues that have hindered previous entries in the series. Uninspired level design, a repetitive soundtrack, and a flat-lining difficulty level that bores more than it engages. Good news: There’s a very distinct Eureka moment, about a third of the way through, where the game suddenly becomes inspired by its own history and we are greeted to some of the finest 2D platforming since Super Mario World.

This Wii U débutante starts with a playful opening that toys with series formalities: no longer is Princess Peach kidnapped and whisked off to a faraway land. Instead, perhaps with Bowser realising that the real treasure of modern society is real estate, Mario and company are forcibly evicted from Mushroom castle as the Koopa gang take over.

But Nintendo’s opening attempt to distinguish is forgotten as soon as the player takes the reigns, with the first couple of wayward hours feeling all too familiar and forgettable, with players flying through the first world without paying much attention. Levels feel exactly like what’s come and gone before, accompanied by that grating “bop, bop” soundtrack that has plagued the NSMB series for years.

Never one to shy away from convention, New Super Mario Bros. U introduces the new Squirrel suit early, and in doing so manages to make the soft opening even easier. The suit allows you to leap and glide, and bouncing on enemy’s heads or tapping ZR (which feels easily accessible on the Wii U GamePad, though I found my hands resting on the back of the control rather than on the shoulders for the majority of the game) will give you an extra vertical boost. I was able to fly through many levels barely needing to touch the ground, and I can’t help but feel it would have been more appropriate to have a gliding trajectory more in-line with the classic Tanooki suit.

I wasn’t having a bad time, yet I felt this was another missed Mario opportunity. The level design beyond the first world was much improved, but the game still felt easy. Then, it happened: a moment I haven’t experienced in 2D Mario for years, an instance of pure happiness. From this point on, NSMBU is brilliant.

The epiphany is Soda Jungle, one of the best Mario worlds I’ve ever played, with beautiful art in every stage, hand-painted tunnels and secrets at every turn. I was no longer whizzing through to the goal pole; I was going as slow as possible to drink it all in. I wanted to stop and explore every tunnel in the hope of unearthing the goodies within.

This thrill of discovery is also helped by the fact that in order to escape Soda Jungle you have to find the secret exit, something that, once again, hasn’t really been seen since Super Mario World. And it’s great.

There’s also a fun design conceit around the three new Yoshi’s, with each colour getting its own special attribute. The pink guys can inflate and float through levels like hot air balloons, while blue Yoshi’s can blow bubbles for you to bounce across, and yellow Yoshi’s bring light to darkened rooms. All three are used to great effect, but yellow Yoshi has the greatest impact, as he will pop up in pitch-black Ghost Houses, and is a necessity if you want to avoid Big Boo and spiritual chums.

Let’s have a bit of history, shall we: the reason why classic Mario games are so revered is because they continue to introduce new mechanics throughout the entire experience to keep the game feeling fresh. New Super Mario Bros. 2 didn’t do this, which is why it was a bit disappointing. New Super Mario Bros. U, however, does it with ease. New enemies are introduced across every world, be it returning favourites or new faces, each requiring a new technique to beat. The game takes great inspiration from all corners of its rich history, be it reintroducing platforms from classic Mario versus modes to tackle Sumo Bros., or trying desperately to find the secret exits to move on to the next world.

For the first time in a long while, I found myself beaming as I played a Mario game. I was pleased at the challenge that bested me, the tricky enemies that beat me, and the puzzles that momentarily stumped me. My greatest moments with the game were when I was truly stuck. I spent upwards of 20 lives on a single boss and didn’t bat an eyelid, but simply kept trying and trying again because I was having that much fun. There are nods to the series’ classics at every turn that filled me with a joyful nostalgia, including one particular boss sequence that is taken straight from the first castle of Super Mario World.

After you’re done with the main game, there are a host of single and multiplayer challenges to play. These are broken down into categories: Time Attack, Coin Total, Total 1-Ups and Boost Mode.

Single player focuses on classic Mario gameplay, only using the GamePad’s screen as an additional display. In local multiplayer, the person using the GamePad is responsible for deploying blocks for the players on-screen to help them safely reach the goal. In spite of effective communication skills and swaps of GamePad control, we struggled to make it through even the simplest of challenges. It will take a lot of practice before the ‘Boost’ player becomes more of a help than a hindrance.

The more players on screen, the more frantic (and at times, frustrating) the action. Boost Rush includes scroll stages where the speed the screen moves from left to right increases the more coins you collect. Players only have a certain number of lives between them to complete a select group of levels. The fact that players can bounce off each other means accidental collisions and subsequent deaths are commonplace, but rather than be frustrated by the experience, it simply became part of the mode’s charm.

New Super Mario Bros. U is a fantastic game hindered by a disappointing opening act. It feels like a game of present and past, where the first half reminds us why today’s games greatly miss the second half’s nostalgic excellence. A great improvement in the variety of level design over its predecessors, and by far the best game in the NSMB series, each world offers something new and exciting to keep me invested. It doesn’t take advantage of many of the Wii U’s features, nor is it a huge graphical leap, but New Super Mario Bros. U is a great day one purchase for anybody looking to pick up a Wii U at launch.

This review was written after spending 8 hours with the game. A retail version of the game was played to completion at Nintendo’s UK offices, with travel costs paid for by VideoGamer.com.