New Super Mario Bros. U no longer promised in 1080p 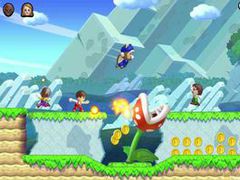 Mario’s debut on Nintendo’s Wii U looked set to dazzle onlookers with super sharp 1080p visuals, but this Full HD dream now appears to be over.

Yesterday the game’s website stated that fans would be able to “experience Mario like never before… in full 1080p HD”, but Eurogamer has noticed the page has been altered to simply state “in high definition”. Boo!

New Super Mario Bros. U will be released November 30.

The 1080p listing was in all likelihood a mistake by whoever was updating the game’s website, perhaps confused by the fact Wii U can output in 1080p – much in the same way Xbox 360 and PS3 can but usually only render games at 720p.