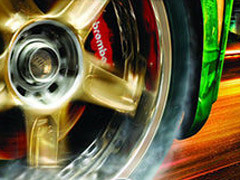 New Need For Speed to be revealed on Thursday

This year’s Need For Speed game will be revealed this Thursday, May 21, EA has announced – and it could mark the return of Need For Speed: Underground.

A darkened teaser image was posted on the game’s Facebook page last night, telling fans to “subscribe to see the first look at the return of NFS”.

As you can see below, however, modifying the image reveals two cars racing through a city street at night, similar to earlier games in the Underground series.

The tease follows almost two years after Ghost Games boss Marcus Nilsson told VideoGamer.com that he would develop a sequel to Need For Speed: Underground if there was enough demand.

“Ultimately, we need to listen to our consumers,” Nilsson told us during Gamescom 2013.

“If people would come to me and say, you know… make Underground 3 with Frostbite 3 with exactly the same features and you’ll go back and sell 15 million copies, then yes, I would build that game. I would. But it’s not that simple.”

This year’s Need For Speed – whatever it may be – is due to release between October and December, although a final release date has yet to be nailed down.