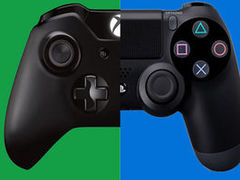 Need For Speed Rivals will feature better graphics on one next-gen console than the other, Ghost Games’ executive producer Marcus Nilsson has suggested – but refused to clarify which.

“What we’re seeing with the consoles are actually that they are a little bit more powerful than we thought for a really long time – especially one of them, but I’m not going to tell you which one,” Nilsson told VideoGamer.com at Gamescom earlier today.

“And that makes me really happy. But in reality, I think we’re going to have both those consoles pretty much on parity – maybe one sticking up a little bit. And I think that one will look as good as the PC.”

Nilsson chose not to answer when asked whether he was referring to the PS4 version.

Pushing him on the subject further, I asked: “Does that mean that the PS4 version of Rivals will look better than the Xbox One version?”

“I think that both consoles will look pretty much on parity,” he replied, “but one of them might stick up a little bit.”

Nilsson’s comments suggest that third-party developers may be looking to take advantage of the additional power of PS4, rather than deliver identical versions across both platforms.

Need For Speed Rivals will be available at the launch of both PlayStation 4 and Xbox One this November.