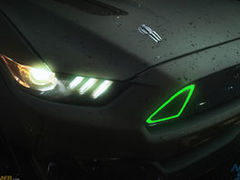 EA has formally announced Need For Speed, the next game in its hit racing franchise heading to PS4, Xbox One and PC this autumn.

This year’s game is being described by EA as a “full reboot” of the franchise, designed to deliver “on what the fans want, and what Need For Speed stands for” with extensive customisation and a night-time open-world setting.

But while the game appears to be inspired by fan-favourite Need For Speed Underground, this year’s game won’t feature a subtitle. It isn’t yet clear whether developer Ghost Games is treating the game as a spiritual successor to Underground, either.

The game is being developed on the same version of Frostbite as Star Wars Battlefront and, just like DICE’s shooter, will not be available on last-gen platforms or Wii U.

“Need for Speed is one of the most iconic names in gaming, and we’re returning it to greatness in this reboot,” said executive producer Marcus Nilsson. “Pulling on our 20 years of history, and then taking a year out from releasing a game, we are making the game we’ve always wanted to. We’re listening to the fans and delivering an experience that will capture their imagination and unleash their passion for cars and speed.”

A teaser trailer offering the first look at “in-game” visuals can be seen below, with a full gameplay trailer coming at E3 on June 15.