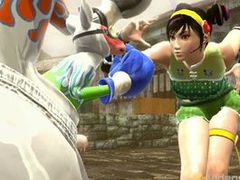 Tekken Blood Vengeance, a CG film being developed by veterans of the game series, will be released in summer 2011, Tekken project director Katsuhiro Harada announced at Namco Bandai’s Level Up conference in Dubai earlier this morning.

The film combines the artistic talents of Yoshinari Mizushima – who directed the Tekken 5 cinematics, amongst other things – with a narrative from Dai Sato, who has worked on the scripts for Cowboy Bebop and Ghost in the Shell: The Standalone Complex.

The story is set between Tekken 5 and 6, although Harada has been tight lipped on the specifics of the narrative.

Unlike the recent Hollywood live action flick, the game developers will retain complete creative control of the project. “There was a Hollywood movie, please forget about that,” joked Harada.

The trailer teased at the Dubai conference can be seen in full below.