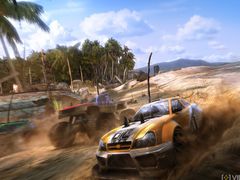 MotorStorm RC, the overhead racer for PS3 and PS Vita from Evolution Studios has been a huge success, Sony has announced.

Whilst not actually releasing sales figures, Sony has revealed that the PSN title is racking up 19 downloads every minute. Sony also notes that a new MotorStorm: RC event begins somewhere in the world every single second, and every 60 seconds eight PlayStation Trophies are awarded to MotorStorm RC players.

Sony also points out that fans should check out the recently released Carnival Expansion Pack, boasting 24 all new events on six circuits.

It would be interesting to find out the ratio of downloads between PS3 and PS Vita, but the game’s success will certainly help drive the development of further low price PSN games from Sony.