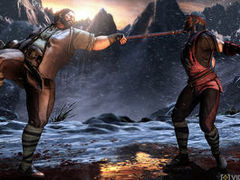 Mortal Kombat XL is finally coming to PC on October 4, months after its debut on PS4 and Xbox One.

The PC port is being handled by a different studio to the one that handled the original release, though, with Qloc now picking up the reigns from High Voltage Software. Hopefully there won’t be quite so many issues this time around…

Mortal Kombat XL includes the base game plus both Kombat Packs, including the Alien, Predator, Leatherface, Goro, skin packs and more.

In addition, owners of the original game will be able to download a new patch introducing an “enhanced online experience” alongside further balancing updates.

Warner Bros hasn’t yet said whether owners of the original game will be able to purchase Kombat Pack 2 individually, or whether they’ll be able to upgrade to XL at a discounted price.