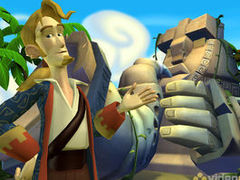 Downloadable episodic adventure game Tales of Monkey Island: Launch of the Screaming Narwhal, released earlier this month on PC and this week on WiiWare, is developer Telltale’s “best performing title” to date.

The success of the game, episode one of a brand new five part episodic Monkey Island adventure series, even exceeded Telltale’s expectations.

The series as a whole is available to pre-purchase for $34.95, with each episode downloading to your computer as it’s released. On Wii the first episode is available to download through the Wii Shop Channel for 1000 Wii Points.

chief executive officer, director and founder, said: “It was a great launch for us. We’re really happy with it. I think it even exceeded our expectations.

“It’s been pretty shocking how much love there is still out there for the Monkey Island series. It seems like a generational thing as well.”

While Connors was unable to divulge sales figures, he said Tales of Monkey Island was “our strongest performing franchise to date”.

“Unfortunately I can’t get into the specific numbers,” he said. “But I would definitely say it’s our strongest performing franchise to date. We’re pretty excited. It was number one on Steam for a few days. It did really well. It’s been our best performing title from our side as well.”

To discover what we thought of Launch of the Screaming Narwhal, head over to our Tales of Monkey Island game page.

Chapter 2, The Siege of Spinner Cay, is due out next month.