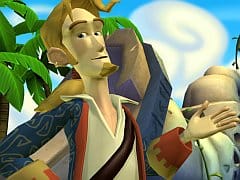 Tales Of Monkey Island: Launch Of The Screaming Narwhal Review

Is there a more revered video game series? The first two Monkey Island games were arguably the greatest point and click adventures ever made. The clever humour, timeless music, memorable characters and ingenious puzzles etched hapless pirate wannabe Guybrush Threepwood, gorgeous Governor Elaine Marley and ghost pirate LeChuck in gaming’s pantheon of classic creations. Now, some nine years after the poorly received fourth game in the series, Escape from Monkey Island, fans finally have a brand new Monkey Island adventure: Tales of Monkey Island, divided into five episodes and developed by Telltale Games. The first, Launch of the Screaming Narwhal, is available to download now for the PC.

Satisfying fans of the originals, those who were there, was an undoubtedly thankless task for Telltale. While the developer is made up of many ex-LucasArts employees, many of whom worked on the famed studio’s classic adventure games, it was always going to prove impossible to pen a script, create characters and produce puzzles on a par with Ron Gilbert, Tim Schafer and Dave Grossman’s work. We all fondly remember Monkey Island’s best moments through rose-tinted nostalgia contact lenses, if not giant goggles. Telltale is following not only the original work, but everyone’s memory of it.

As a result, what we have is a decent five hour opening episode that suffers from not having a single moment you’ll remember for longer than a day after completion. The game’s functional – the graphics are vibrant and crisp (although the off-putting plasticine character models from previous Telltale games returns), and the voice actors, bar the awkwardly gruff Eastenders-esque Elaine, do a good job (Dominic Armato reprises his role as Guybrush from the third and fourth game). But, despite all this good work, there’s something missing. After completing the game it’s hard to pick out highlights – you have a more general feeling of having had a pleasant time than anything else.

This is in direct contrast to the first two Monkey Island games, adventures that were packed with stand out, hilarious, stick in your head forever moments. There are perhaps three genuinely funny lines throughout the entirety of the first episode – one a rebuke from a grizzled glass-blowing pirate, another a direct reference to the original game and the last a knowing nod to the silly reality of video games (“because of my plus-10 charisma?” and “man, those are some sturdy undies”). However, and this is a crucial however, there is not one bona fide laugh out load gag or slapstick moment throughout.

Even the plot feels underwhelming. The game begins with Guybrush chasing LeChuck across the Caribbean – Elaine is tied up on her own ship as LeChuck begins some kind of demented monkey sacrifice. Guybrush attempts a rescue, using a cutlass soaked in voodoo mojo. When he runs the ghost pirate through something goes wrong – LeChuck is transformed from ghost into living, breathing human, and his evil mojo is transported into Guybrush’s left hand as well as spread across the sea.

To make matters worse, an explosion sends Guybrush spiralling into the ocean. He wakes up on the beach of Flotsam Island, a quiet pirate-infested land where the wind mysteriously blows inward, preventing any ship from leaving. Your overall goal is to get off the rock, track down your lovely wife and stop LeChuck’s evil machinations once and for all, but in episode one it’s all about sorting out that wind and getting hold of a ship.

The game can be played entirely with the mouse: left click and drag to move; left click to interact with the environment, items and objects; and click the scroll wheel to open the inventory (from there you can examine items, combine them and select them for use in the game). For the most part it works well, only getting fiddly when in the island’s jungle – an icon allowing you to instantly transport to the area’s entrance is easily clicked on by mistake when trying to get Guybrush to move to the left.

On the island, the game quickly settles down into puzzle solving, item interaction and NPC chatting via witty dialogue options. It actually rekindles memories of the second game, Monkey Island 2: LeChuck’s Revenge. Washed ashore, you’re stripped of all your possessions and forced to start from scratch. Your first tentative steps involve meeting the cast – there’s a local news reporter, a glass blower, a French scientist (a terribly underwhelming villain), a pirate doll-obsessed pirate (a clear dig at geekdom), a ship captain and some old favourites. There’s a bar, a jungle, a dock and more mysterious ancient carvings than you can shake a three-headed monkey at.

It’s all very Monkey Island. The tone is just about right and the gags good (“Holy ships!”). As a fan, when that unmistakeable Monkey Island music kicks in it’s impossible to prevent the hairs on the back of your neck from sticking up like a carpet made of hedgehogs. When Guybrush references the original games (look out for nods to insult sword fighting, rubber chickens and Mêlée Island), you’re transported to a time when weekend-long sessions were only broken by booming calls to dinner from the kitchen. Tales of Monkey Island makes you smile, and that is undoubtedly a good thing.

Viewed with a fresh pair of eyes, with those nostalgia goggles off, Tales of Monkey Island’s puzzles and dialogue unfortunately let it down. Too often the puzzles feel like item grind – you’re stuck so using everything with everything else until something works is the only remaining option. Now, fans of the original games will know that this is nothing new – the solutions to some of the sillier puzzles made no sense at all – but the difference here is the setting, dialogue and characters aren’t compelling enough to justify the odd bouts of frustration. Everyone’s experience will differ of course, but we found one or two puzzles a little too left of field and unsatisfying once complete.

The puzzles are often plain old boring, too. One in particular, which sees you having to negotiate through a maze-like jungle with the use of a map, is a particularly frustrating affair made more so by the often fiddly, inaccurate movement of Guybrush. Towards the end of the game a key puzzle feels too drawn out – it’s repeated, essentially, four times. Great video game puzzles are ones that make you feel smart once you’ve worked them out, or make you kick yourself when you’re forced to ask for a hint. You don’t get that from Episode One.

It’s hard to put your finger on what exactly makes Launch of the Screaming Narwhal an underwhelming return to the series. Perhaps it suffers from being the first of five episodes – you feel much of what you see and do exists only to set up upcoming chapters (Guybrush suggests as much when you try to interact with one particular object). At five hours it feels short, despite the fact that its length is deliberate and it’s priced accordingly. Because of that it’s almost impossible to lose yourself in Flotsam Island and truly engage in its inhabitants. That they’re not particularly memorable doesn’t help, either.

Still, Telltale’s created a perfectly enjoyable game that all Monkey Island fans should at least try. It’s not as engaging or memorable as we remember the originals to be, and the puzzles won’t blow anyone away, but it’s still hugely exciting to play a brand new Monkey Island game, such is the enduring popularity of the early 90s classics. And, if there was any doubt, the game proves that the Monkey Island universe is one that’s as compelling now as it was nearly 20 years ago, and well-suited to the Telltale treatment.

What we have is a decent five hour opening episode that suffers from not having a single moment you'll remember for longer than a day after completion.
6 It's Monkey Island! Puzzles often boring No LOL moments Underwhelming characters