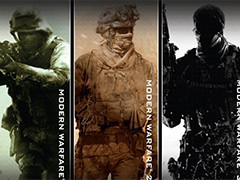 The $30 pack includes all three games plus the first DLC for Modern Warfare 2, the listing states. It’ll only be available on Xbox 360 and PS3, however, and will not be available on PS4 or Xbox One. VideoGamer.com has contacted Activision for clarification on whether the pack will be available in the UK.

The listing follows a leak on Amazon UK last month, where the game was also listed. Amazon Japan also has it listed for release on May 17. Formats were not revealed, however, leading to speculation that all three games could be being remastered for current-gen.

That isn’t the case, of course, with only a remaster of the original Modern Warfare currently confirmed to be in development, and included with all Legacy Edition copies of this year’s Call of Duty: Infinite Warfare.

Infinite Warfare releases on PS4, Xbox One and PC on November 4.

Pre-order Call of Duty: Infinite Warfare Legacy Edition now on PS4 or Xbox One to ensure you get the Modern Warfare remaster.