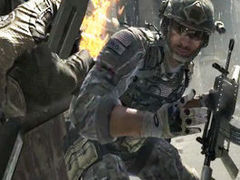 Modern Warfare 2 thrived on the idea of a burning American flag, but it looks like Modern Warfare 3 won’t be content until it has nasty terrorists dancing a merry jig over the smouldering remains of the entire Western world.

Modern Warfare 3 wants to be big, bigger, and indeed the biggest, so it’s swapped the scope of Modern Warfare 2’s city streets and quaint little suburban picket fences for hulking skyscrapers and exploding skylines. Where better place to start, then, than New York City and its iconic towering buildings?

Even littler things like grenades have got the memo. Why have a flashbang explode once when you can instead have it explode nine times? Say goodbye to old and busted flashbangs, and hello to the new hotness of 9-bang grenades.

Why choose between a Red Dot Sight and an ACOG scope when you can instead have an attachment that lets you have the best of both? Say hello, then, to my little friend – some particularly fancy holographic EOTech sight that probably costs more money than my house.

But, really, I feel sorry for the helicopters. The start and end of Call of Duty: Modern Warfare 3’s opening Manhattan level – Black Tuesday – features the resplendent vehicles in a particularly bad state. Is Slegehammer Games harbouring some ill sentiment towards this magnificent rotorcraft? Did Glen Scofield have a bad helicopter experience as a child? Either way, the action fades in with new Delta Force hero Sandman and player-character Frost having to cut their way out of a downed chopper before hoofing it through the streets of New York’s Financial District, while in the background a Russian missile smashes into a skyscraper.

Within ten minutes of the demo starting you’re having an all-out firefight in the devastated remains of the New York Stock Exchange, a sequence which comes across like a louder and roomier take on hunting down Khaled Al-Asad in the TV studio in Call of Duty 4.

You’ll be disappointed if you’re after something new and revolutionary, but even a few minutes of this should have you whipped into a frenzy if you fancy hopping aboard the annual Call of Duty rollercoaster and ooh-ing and aah-ing at all the explosive set-pieces.

As you scale the inside of the building – your objective is on the roof – there’s ample opportunity to look down at the devastation below you. As you reach the top of the building you plant a thermite charge on a Russian jammer and watch as the offending structure twists and burns, hissing cold metallic screams, on its brief journey to the ground. It’s a big, bold, and flashy way to reintroduce us to one of Call of Duty’s favourite tricks – known officially as the ‘plant a something on a something’ objectives.

Then it’s just a case of calling down masses of ordinance from a Reaper drone – which brings back glorious memories of Modern Warfare 2’s multiplayer between thick and billowing plumes of smoke – until a Black Hawk shows up for exfiltration. You leap off the building to man the helicopter’s turret, and then obviously everything goes swimmingly because it’s a truth universally acknowledged that a helicopter is the safest place to be in the Call of Duty universe.

Of course not. As your helicopter gets hit by an enemy rocket, your viewpoint of downtown Manhattan is shifted to an uncomfortably vertical perspective as warning sirens mask the sound of malfunctioning rotor blades. Then comes the money shot, with your failing craft spinning out of control perilously near a skyscraper under construction, the pilot managing to recover control seconds before collision.

Well, that’s the first level done. Phew. All that’s left is the dozen-odd other levels, mixed in with some inevitably shocking scenery, shots of the Western world crumbling, and the promise of World War 3 itself.

Oh, and the multiplayer.

Call of Duty: Modern Warfare 3 will be released worldwide on November 8 for Xbox 360, PS3 and PC.