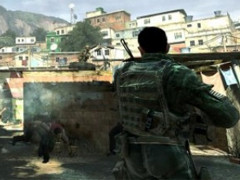 Modern Warfare 2 multiplayer map Favela has been taken offline following complaints from Muslim players, who discovered offensive imagery contained within one of the map’s rooms almost three years after the game’s release.

According to Kotaku, two paintings found in one of the map’s bathrooms contained a quote attributed to the Prophet Muhammad, which reads: “Allah is beautiful and He loves beauty.”

The discovery of the text led to complaints from those of Islamic faith, to whom it can be seen as offensive to display holy teachings written in the bathroom.

Activision later removed the map from the game’s map rotation. The map won’t reappear until the publisher can remove the offensive texture through a title update.

“We apologize to anyone who found this image offensive,” Activision told Kotaku. “Please be assured we were unaware of this issue and that there was no intent to offend. We are working as quickly as possible to remove this image and any other similar ones we may find from our various game libraries.

“Activision and our development studios are respectful of diverse cultures and religious beliefs, and sensitive to concerns raised by its loyal game players. We thank our fans for bringing this to our attention.”

Activision has yet to provide an ETA for the title update.