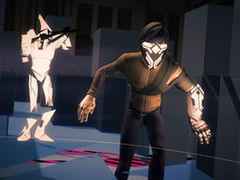 Volume: Coda will be available on PlayStation VR at launch and features 30 new levels, a brand new cast of characters and a “new VR setting as players take on the role of The Troubleshooter”.

It’ll also update the original game’s campaign to support VR, and will be available to all owners of Volume free of charge.

The PlayStation Vita version of Volume, meanwhile, has “hit some roadblocks”, but is still in development, Bithell says.

“Rushing out a weak port wasn’t an option, and I’m proud of what the team have managed to squeeze into that awesome little platform.”

A release date for PlayStation VR has yet to be announced, but expect it to arrive in the first half of 2016.

The reveal was hinted at on Twitter, where Bithell teased: “yeah, think I’ll announce a game today.”

The tease follows just two months after the release of his last game, Volume, which landed on PS4 and PC in August. A PS Vita version is also due for release later this year.

“Ambitious and accomplished, Mike Bithell’s follow up to Thomas Was Alone is a beautiful game which sometimes undermines its sizeable accomplishments,” Burns said in his 8/10 review. “It’s flawed, then and yet still utterly recommended, especially if you’re the competitive type. Or hate your friends.”

Bithell has yet to reveal what he has planned for his third game.