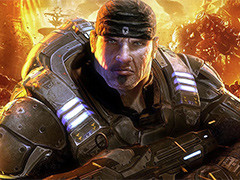 Microsoft has acquired the rights to the Gears of War IP from Epic Games, with new studio Black Tusk set to take over development of the franchise.

In a post announcing the acquisition, Microsoft Game Studios’ corporate VP Phil Spencer revealed that the platform holder had hired Gears of War 3’s executive producer Rod Fergusson to overlook the series at Black Tusk, with more details on the game’s development due “later this year”.

“I’m extremely excited to be joining Black Tusk Studios to oversee development on the ‘Gears of War’ franchise,” said Fergusson. “I’ve been privileged to work on a lot of great games with a lot of great teams, but ‘Gears’ has had the most impact on me professionally and personally, so this really feels like a homecoming. I can’t wait to share more with you all soon.”

Fergusson left Epic in August 2012 to help finish Irrational Games’ BioShock Infinite. He later revealed that he had helped form a new studio with 2K where he served as studio head.

“Black Tusk has assembled a world-class team with deep experience and passion for the shooter space, and specifically the ‘Gears of War’ franchise,” added Spencer. “I am extremely confident that under the leadership of Hanno Lemke, Rod Fergusson and our other leaders in the studio, Black Tusk is well equipped to take on the future development of the ‘Gears of War’ franchise.”

And while Spencer claims that that title hasn’t “been shelved”, it appears that the title may evolve into Gears of War.

“This obviously isn’t something that started yesterday in terms of our discussions with Epic,” he told GamesIndustry.biz.

“Hanno [Lemke, General Manager of Black Tusk Studio]’s been involved for quite a while, so he’s known that this is something we could land. And the leadership team there obviously knew as they started to build their road map for what they would be focused on. I wouldn’t say things have been shelved. Obviously, this will become a big focus of the studio and something that will be critical to them driving forward. There’s not really something that was on the road map that all of a sudden goes away.”