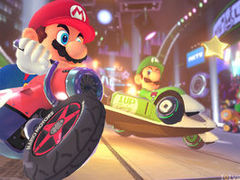 Mario Kart 8 runs at 60fps in single-player and 2-player, but at only 30fps during 3 and 4-player modes, Nintendo has told VideoGamer.com.

The news follows a fresh wave of hands-on previews and a brand new trailer released today, and is similar to issues found in previous Mario Karts that saw the frame rate drop during split-screen multiplayer.

During his hands-on playtest, Brett commented that the frame rate issue didn’t lead to any “noticeable lag in control, but visually, it looked a mess”. Nonetheless he was still left impressed by the overall experience, calling it the “best Mario Kart” yet.

Mario Kart 8 launches exclusively on Wii U on May 30.

More multiplayer mayhem in the world of Super Mario.

More multiplayer mayhem in the world of Super Mario.