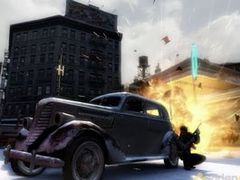 2K Games has confirmed that a Mafia II playable demo will be available to download worldwide on August 10 for PS3, Xbox 360 and PC.

The Mafia II demo features the Buzzsaw level, where Vito and his buddies, Joe and Henry, are sent to take out a mobster known as “The Fat Man”. Events take place during the summer of the ’50s – a time considered the “Birth of Cool”, and with it, rock ‘n’ roll, hot rods, and rebellious attitudes.

Once you’ve sample the demo it won’t be long before the full game hits stores. Mafia II is scheduled for release on August 27.