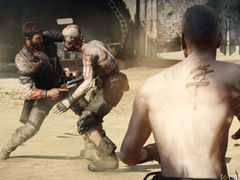 Mad Max will release on PS4, Xbox One and PC on September 4 in the UK, Warner Bros. has confirmed. However, both the Xbox 360 and PS3 versions have been cancelled, Game Informer reports.

“Much has changed since the game was announced at E3 a few years ago,” says Game Informer’s report. “Most notably, the studio has decided to leave the planned Xbox 360 and PlayStation 3 versions by the wayside. That move has allowed the team to deliver stunning vistas and effects that will challenge your expectations of what the Wasteland might look like.”

VideoGamer.com has contacted Warner Bros. for more information regarding the last-gen version’s cancellation.

Nevertheless, those looking to pick up the current-gen or PC versions will receive an additional Magnum Opus car body called The Ripper for free when they pre-order, packing in a “powerful V8 engine, upgraded exhaust with custom off-road tires, a ramming grill and a tuned suspension so it can take on a variety of Wasteland surfaces”.

The release date means that Mad Max will launch prior to Avalanche’s other open-world game Just Cause 3, which is due to launch on PS4, Xbox One and PC this winter.

More details on Mad Max are due to be revealed in this month’s issue of Game Informer, which is expected to land digitally later today. Fancy getting your hands behind the wheel of The Ripper? Pre-order Mad Max now.

UPDATE: Warner Bros. has provided VideoGamer.com with the following statement regarding the cancellation of the Xbox 360 and PS3 versions:

“To ensure players get the best Mad Max experience possible, Avalanche Studios is focused 100% on developing the game for PS4, Xbox One and PC. This has allowed the studio to maximize the potential of those platforms and stay true to the core vision of Mad Max.”