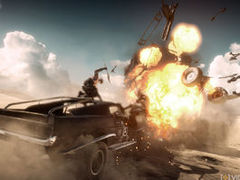 Update: The official gameplay trailer is now available to view.

The open-world post-apocalyptic action game will be shown off in brand new real-time footage, which Avalanche founder Christofer Sundberg says he is “so proud to [be able to] finally reveal”.

Mad Max was announced during E3 last month, and is due for release on Xbox One, PS4, PC, Xbox 360 and PS3 in 2014. The game follows the tale of the post-apocalyptic warrior as he fends off gangs while attempting to escape The Wasteland.

A time for the gameplay trailer has yet to be confirmed.