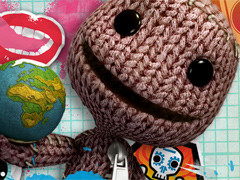 LittleBigPlanet 3 coming to PS4 this November

UPDATE: LittleBigPlanet 3 will release on PlayStation 4 this November, Sony has announced, and run in full 1080p.

“Featuring all new Create tools, LittleBigPlanet 3 massively expands possibilities for User Generated Content enabling you to bring your own world to life in the game and explore fans’ creations from around the globe,” said Sony. “LittleBigPlanet 3 also gives players access to over 8.5 million of these levels already created by the LittleBigPlanet Community on previous platforms, offering endless fun from the day of release.

The creation game is being developed by Sumo Digital and will feature backwards compatibility with levels built in previous LittleBigPlanet titles.

The trailer below confirms Sumo Digital as the developer.

Oddsock, can wall jump, is faster and uses super speed to power things.

Toggle, is the biggest new friend and strongest, able to push objects. Can become smallest at the tap of a button.

Swoop is a bird, and can fly.