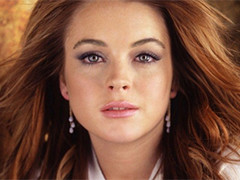 Lindsay Lohan is to launch a lawsuit against Rockstar Games over the alleged use of her image, TMZ reports.

According to the site, Lohan’s legal team is “currently crafting a lawsuit – demanding Rockstar Games pay some serious money for using Lindsay’s image in the game.”

TMZ’s report suggests that Lohan’s legal battle is linked to a promotional image of a woman holding a mobile phone (pictured above) and a Random Event mission where “where a Lindsay Lohan look-alike asks the player to take her home and escape the paparazzi”.

It isn’t known how much Lohan is seeking from Rockstar or, of course, whether there are any grounds to her claim. 80 per cent of voters on TMZ’s site do not believe that the character in GTA 5 is based on Lohan.

Lohan is the second star to have allegedly filed a legal dispute with Rockstar over GTA 5. Back in October, TMZ reported that rapper Daz Dillinger was suing Rockstar over the alleged unauthorised use of two of his tracks.