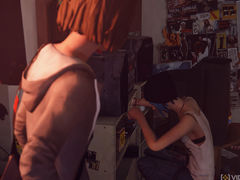 Life is Strange director on the importance of female protagonists

Life is Strange’s creative director Jean-Maxime Moris has told VideoGamer.com that he would be “happy” if the upcoming adventure changes people’s minds about releasing games with a female lead, after his studio encountered resistance from publishers who believed its game would be better suited with a male protagonist.

“In the current climate, I’m happy if playing the game changes one person’s mind,” Moris told us earlier this week, “especially in the publishing world where they can be reluctant to publish games that have female protagonists, then that’s good.

“But we are creatives, not political militants. I think the issue with female leads – and this is me as an individual – is a small part of a much bigger and universal issue, which is gender equality. Of course we can do little things in our community, but the bigger change has to come from the top, I think.”

Moris’ comments follow a developer diary released by Dontnod last week in which he revealed:

“Square is basically the only publisher who didn’t want to change anything about the game. We had other publishers telling us to make it a male lead character, and Square didn’t even question that once.”

The episodic series is set to begin at the end of this month, with players taking on the role of Maxine Caulfield, a photography student who discovers that she possesses the power to rewind time at will.