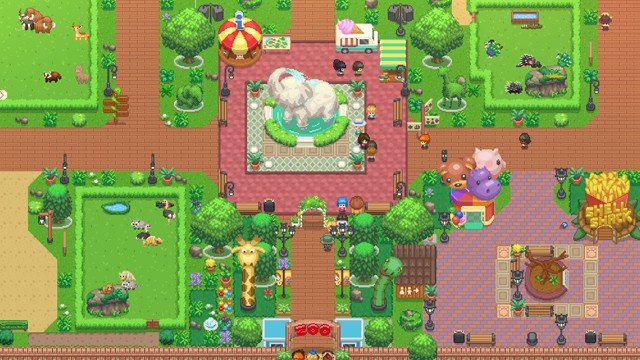 Publisher of Descenders and Hypnospace Outlaw No More Robots and developer Springloaded Games have announced Let's Build a Zoo, a pixel-art styled zoo management game that also allows you to create your own animals by splicing existing ones together.

In the game, you'll be in charge of running the sanctuary, including building enclosures for the animals and of course other buildings and decorations as well as facilities to keep your guests entertained. However, in a neat twist as well as the "hundreds" of animals to breed and import, the game also lets you create your own animals by splicing together any other two to make a sort of hybrid, with examples given including a Crocodile and Duck to make a Crocoduck or a Chicken and a Cow to make a Chickow.

The devs promise that over 300,000 combinations will be possible, and you'll also be able to choose how to run your zoo thanks to a fully fledged morality system that will allow you to run your staff into the ground, if that's your thing.

You can check out the reveal trailer as well as a video demonstrating gameplay down below. Let's Build A Zoo is currently scheduled for a summer release on PC—with a closed beta set for launch "very soon"—followed by a console release on Nintendo Switch, Xbox, and PlayStation platforms at a later, as yet unconfirmed, date.