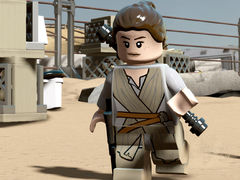 A playable demo of LEGO Star Wars: The Force Awakens is now available to download on PS4.

The demo lets players join Rey, Finn and BB-8 “as they evade the villainous First Order” and, by the sounds of it, get behind the wheel of the Millennium Falcon.

“Engage in Blaster Battles with Stormtroopers, use Multi-Builds to race through Niima Outpost, and dogfight with TIE Fighters through derelict Imperial Star Destroyers in the Millennium Falcon before escaping Jakku!” reads the demo’s description.

You’ll need 1.1GB of available storage space to download it. The demo does not appear to be available on other platforms.