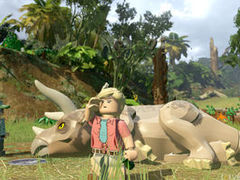 The release date means that the game will hit day and date with this summer’s movie.

LEGO Jurassic World features re-imagined LEGO versions of all four Jurassic Park films, including the 1993 original and this summer’s blockbuster, and is available with exclusive, physical pre-order items at participating retailers.

Pre-order the game at Amazon and you’ll receive a bonus Dr. Wu minifigure, or opt for GAME to grab yourself a LEGO Jurassic World Gallimimus Trap Playset.

Take a look at the trailer below for a sneak peek at some of the characters and dinos you’ll get to control when the game arrives next month.