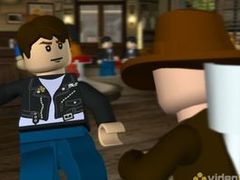 LucasArts and TT Games have announced that LEGO Indiana Jones 2: The Adventure Continues will be released this autumn for Wii, DS, PS3, Xbox 360, PC and PSP. The game is in development at Traveller’s Tales, the team behind the first LEGO Indy game and the LEGO Star Wars series.

LEGO Indiana Jones 2 presents a tongue-in-cheek take on all four cinematic Indiana Jones adventures – including for the first time ever Indiana Jones and the Kingdom of the Crystal Skull and the ability for players to create levels of their own.

Players will be able to take control of all new Kingdom of the Crystal Skull characters such as Mutt Williams on his motorcycle and use special abilities, including Oxley’s Crystal Skull Power.

The new Build Your Own Adventure Mode will allow players to create their own levels and environments and share them with their friends. Users will also be able to combine their created levels with the existing ones in the game.

You’ll find the first screens over in the gallery.