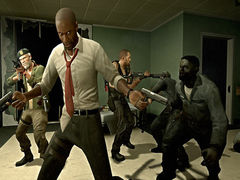 Valve has announced that an update to the original Left 4 Dead have been rolled out on Steam, which amongst other things adds Team Versus 4 on 4 competitive matchmaking to the game. You’ll find further details of the update here.

In related news, Valve has also confirmed that the Left 4 Dead 2 demo on Xbox LIVE is now available to Silver members.

The Left 4 Dead 2 demo features gameplay taken from “The Parish” campaign, set in the New Orleans French Quarter. Playable by 1 to 4 players over local or Internet connections on both the Xbox 360 and PC (with two-player split screen available on the Xbox 360), the demo features all the new boss infected zombies and new melee weapons included in the full product.