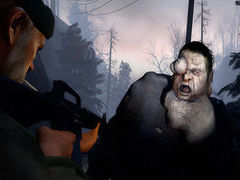 Left 4 Dead 3 and Source 2 are alleged to have been spotted during a recent tour of Valve’s offices by members of the Dota 2 subReddit.

Amongst a host of snaps from the tour was a picture of a Valve change log, which clearly mentions “L4D3” and “Source2”

Valve hasn’t officially announced either project, but the studio has previously hinted that both are likely to happen.

Back in November Valve boss Gabe Newell said that the studio had been “working on Valve’s new engine stuff for a while,” adding “we’re probably just waiting for a game to roll it out with”.

Given Source 2 is mentioned alongside Left 4 Dead 3 in the change log, it’s possible the zombie sequel could debut the new engine.

Regarding Left 4 Dead 3, Valve’s Chet Faliszek has said he’d very much like to return to the franchise.

Given the picture appears amongst a host of other snaps from the Valve tour, we’re assuming it may not have been doctored. But why would Valve leave such a reveal in plain sight? Perhaps the Half-Life studio is deliberately trolling its community, or this could be the first part of a well-planned PR campaign leading to the Left 4 Dead 3 announcement.