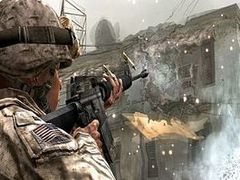 Next year’s Call of Duty game, set for release in the back half of 2011, has been described by Activision CEO Eric Hirshberg as a “new, large-scale … first-person action title.”

Hirshberg added: “The creative talent and resources that we now have devoted to the Call of Duty brand are unprecedented and given the gameplay we’ve seen to date, we could not be more excited about next year’s release.”

For the time being, though, all sights are set on Treyarch’s Call of Duty: Black Ops, which launches worldwide on November 9.

It’s not yet clear which studio is handling development of the 2011 game. Sledgehammer Games has been confirmed to be working on a new Call of Duty which will “extend the franchise into the action-adventure genre.” A summer job listing also seemed to confirm the title will be a first-person shooter.

Given the problems and subsequent personnel changes at Infinity Ward it’s hard to imagine the studio will be putting out a triple-A product two years after the release of Modern Warfare 2.