KOTOR MMO to be unveiled ‘later this month’ 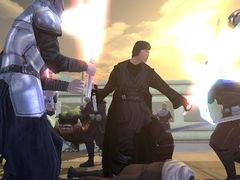 BioWare will officially lift the lid on the Star Wars: Knights of the Old Republic MMO later this month, according to internet reports.

CVG said the official unveiling of the game is set for sometime within the next 30 days.

KotOR MMO is one of the worst kept secrets in gaming. Developed by BioWare Austin, the game was inadvertently confirmed by EA boss John Riccitiello, who told portfolio.com at E3: “We’ve got two of the most compelling MMOs in the industry in development. The first title, based on the Warhammer property, will launch soon. And the one that people are dying for us to talk to them about – in partnership with LucasArts, coming out of BioWare, which is, I think, quite possibly the most anticipated game, full stop, for the industry, is at the point where we get closer to telling you about it.”

When asked directly if this was the Knights of the Old Republic MMO, Riccitiello said “yes”. Neither EA, BioWare or LucasArts has ever officially announced the game is in existence.

Looks like it won’t be long until the lid is blown off what will undoubtedly be one of the hottest MMOs in existence. Watch this space.