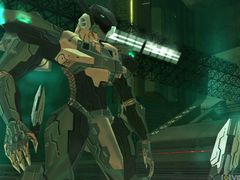 Kojima Productions has put work the announced Zone of the Enders sequel on hold, with the team dismantled whilst Hideo Kojima re-evaluates the franchise.

The news came during the recent HideoBlog web radio show, which was heard and translated by Siliconera.

Before confirming that the ZOE sequel project was on hold, Kojima spoke about the ZOE HD Collection and the difficulty in transitioning from the 30fps original to 60fps. Kojima apologised for the game not living up to fan expectations – largely some choppiness during gameplay – and revealed his team has been working on a hefty fix.

The entire game has been re-programmed and will be rolled out as a free update for the PS3 version. There is no plan to patch the Xbox 360 game.

Regarding the sequel, Kojima says he wants to hear from fans once again as to whether they still want to see a sequel.