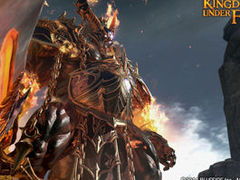 Kingdom Under Fire 2 looks better on PS4 than PC

UPDATE: Worlds Factory has since spoken to Blueside to clarify Lee’s comments, which claims that he was actually referring to the PC version being played on the average computer.

“We never compared graphic quality of PS4 with high-end computer,” Blueside said. “When we answered to that question, we answered by comparing PS4 with average computers.”

ORIGINAL REPORT: The PlayStation 4 version of upcoming MMORPG Kingdom Under Fire 2 has “better graphics” than the PC version, according to producer Sang-Yoon Lee, who believes that PC users will be “very angry” to hear about the visual discrepancies.

Talking about the differences between the two versions with 2p.com (via Gaming Bolt), Lee admitted that it was “a little hard to [discuss the differences] right now because if the PC users know, they will be very angry. PS4 has much better graphics. PS4 graphics quality will be much better and higher than the PC version.”

It isn’t yet clear how exactly the two versions will differ.

Kingdom Under Fire 2 is due to release on PC later this month, with Blueside aiming for a simultaneous release across Europe, Japan and Korea on PS4 later this year. The developer says that it’s also in discussions with Microsoft to try and bring the game to Xbox One.